skip to main | skip to sidebar

This past November, we made note of the fact that Thomas Van Arsdale had his investiture as a knight of grace covered in the local press. It seems that he is a minor celebrity in the states and he has a feature story covering his rise in the Order in a local magazine, as well. This is a very interesting article and the author can be forgiven for some minor mistakes in the way that the Order functions and factual errors. At any rate, it is always nice to have publicity for the Priory in the United States of America.
Posted by VOSJ Source at 11:45 AM No comments:

The VOSJ in Scotland provided a great boost to emergency care on the Isle of Arran. The beneficiary of the Order's support was the Arran Mountain Rescue Team, who were provided with a new base of operations built, in part, through donations from the VOSJ. Since the 1960s the team had been based in a hut behind the old Brodick Police station. Speaking on behalf of the the Scottish Priory, Sir James Stirling of Garden commented that "The Order of St John has supported Scottish mountain rescue teams for many years because we firmly believe that we must provide better accommodation for the brave volunteers who risk their lives in the cold and wet to save others." The team were very pleased with the new facilities that they had available for use. 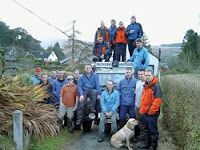 Pro Utilitate Hominum
Posted by VOSJ Source at 8:22 AM No comments:

Keeping up with our American theme, we've received word (though, admittedly a bit late) that the VOSJ's Priory in the United States of America has now appointed regional committee chairs in several metropolitan areas around the country. These regional committees had been approved by the Priory's board of governers earlier in the year, but the chairs in each region were appointed this June by the prior, Marshall Acuff. 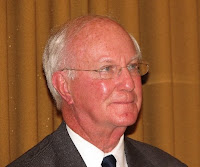 There are now official representatives of the VOSJ stationed in Atlanta, Charleston/Savannah, Connecticut, Dallas, New York, St Louis, San Diego, San Francisco, and the Washington, DC area. In our opinion, this is a most welcome development. It accompanies the recent move of the Priory offices to Washington, DC in giving the Order's work in the United States a more organized, national feel. In a Priory that has no St John Ambulance presence, it is very difficult to maintain visibility among average Americans. With this move towards greater organization and mobility, it may be possible to increase the membership (it currently stands at about 1,100 confrères) and the support to the St John Eye Hospital in Jerusalem.

One development in matters concerning the VOSJ that occured during our recent extended absence was the introduction of a new website for the Order's Priory in the United States of America. The web address is the same (http://saintjohn.org/), but the format and content have been greatly improved (as shown by the screenshot below). 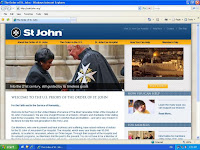 The old website included very fancy Flash functionality, but was difficult to use. The new page is much more methodically laid out and all the information one could need is displayed clearly. There is even a section for Priory "Members Only," presumably to help confrères stay abreast of Order news. Perhaps the most beneficial aspect of the change is that the new American web presence fits in much more seemlessly with the international website of the Order at http://www.orderofstjohn.org/. This is certainly a positive development for our American confrères.
Pro Utilitate Hominum
Posted by VOSJ Source at 6:50 AM No comments:

About a week ago, we recognized the promotion of Margaret Hunt to the grade of Dame of Grace. It would seem that the local press in Queensland is enjoying sharing stories of VOSJ awards. In this case, the South-East Advertiser notes that Rosemary Moran was made a member of the VOSJ after nearly two decades of volunteer work. She was a prominent feature at public events in and around Brisbane providing first aid and assistance as so many St John Ambulance members do around the world. Well done! Below you can see the Governor of Queensland, Penelope Wensley, standing with the new confrère after the investiture. 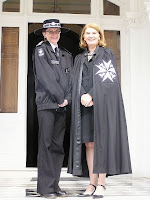 Pro Utilitate Hominum
Posted by VOSJ Source at 10:08 AM No comments:

In yet another oversight on our part, we forgot to mention the recent birthday of one of the VOSJ's highest-ranking members. Nelson Mandela was made a Bailiff Grand Cross of the Most Venerable Order of the Hospital of St John of Jerusalem in January 2004. In July of this year, the former President of South Africa was blessed to turn 91 years old.

Pro Utilitate Hominum
Posted by VOSJ Source at 6:59 AM 2 comments:

A week ago, the Priory of New Zealand held its annual investiture service. One of the members promoted in the priory is also the recently appointed chancellor. Garry Wilson has begun his six year term in that post and also been made a knight of the Order.

The ceremony was presided over by Sir Anand Satyanand who, as Governor-General of New Zealand is also head of the Order's priory there.

Sir Anand welcomed Chancellor Wilson to his new role but noted that the job of a group devoted to health such as the VOSJ was more difficult today in the face of world problems such as the Swine Flu pandemic. He also made it clear that "St John is deeply involved with the Ministry of Health in helping to manage the response in the spread of the virus."

VOSJ Source
London, United Kingdom
To protect our sources, we are choosing to remain anonymous. We are all middling confrères of the Venerable Order of St John, but we've been around a while and know something of its workings.

What Else We Read